This piece was originally published on The Conversation. 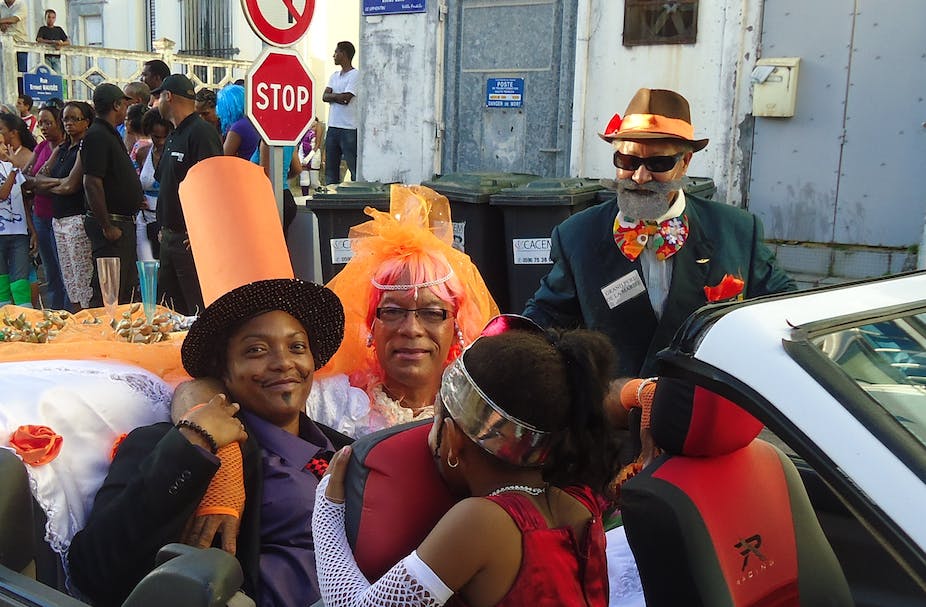 Anyone in the French Caribbean islands of Martinique or Guadeloupe during the carnival festivities will witness a unique and wonderfully subversive tradition: le mariage burlesque.

As a legacy of the refusal to assimilate into a French model of marriage and family, le mariage burlesque parodies the idealised fiction of a heterosexual nuclear family unit. Each year on lundi gras (the first Monday of the carnival) men and women perform each other’s conjugal role by cross-dressing as their gendered other. So the man masquerades as the (often pregnant) wife and – to a lesser extent – the woman dresses and performs as the husband. The happy couple is followed by a wedding procession and are “married” by a registrar and a priest along the carnival route.

The late Martinican theorist Édouard Glissant described the tradition as a critique of the family structure imposed by the colonising French republic. He wrote:

There is an occasion in Martinique in which men and women both agree to give a performance of their relationship. This is the tradition of the burlesque marriage during carnival, a critique of family structure.

In recent years there have been debates on the traditional role of family in France. A universalist notion prevails – the model of family promoted by the French Republic is made up of a heterosexual couple who live together, whether married or not, with children born of (or adopted by) the two parents.

Controversy around alternative forms of conjugal union, including legislation to enable same-sex marriage, gay adoption and surrogacy, have prompted fierce debates on the continued relevance of this traditional model. And, given that recent changes in legislation apply to France’s overseas territories, these debates have questioned the continued relevance of the French values of marriage and family in Guadeloupe and Martinique.

French colonial discourse related marriage to “civilisation”. According to this racist logic, the African – who was considered subordinate – was unsuited to marriage. In the French Caribbean, unions between enslaved men and women of the same plantation were encouraged as they would produce another generation of slaves for the profit of the owner. Marriage between slaves (with the permission of their master) became legal from 1664 – but, in reality, the plantation system constrained the development of strong family units which would often be broken up when slaves were sold on to other plantations. This tended to disrupt the pure parent-child line of descendance or “filiation” promoted by the French state.

Following the abolition of slavery in 1848, French policies of assimilation (into la grande famille nationale) reinforced a desire for official marriage among its “daughters”, or les filles, as Guadeloupe and Martinique were disparagingly known. The extended family, in which grandparents, aunts, nannies and godparents are as likely to raise children as mothers, therefore came to signify not only resistance to a dominant social order of family imposed by slave owners, but also its imposition on French Caribbean territories during the aftermath of slavery.

In 1946, the islands voted to become overseas départements, granting them a distinct political status in relation to mainland France that promised full integration into the French Republic. However, this status has resulted in many social and economic disparitiesincluding severe unemployment, high cost of living and persistent racial discrimination.

As researchers in the social sciences have shown, family in this context – as the product of both African kinship traditions and its restructure during slavery – did not conform neatly to the model of family promoted by the French Republic.

Traditionally, le mariage burlesque was a ritual (with both European and African roots) to promote the birth of new unions during the festival period in the run up to Lent. Men would often adopt women’s roles during carnival through male-to-female cross-dressing. Today some gender studies scholars have argued that cross-dressing in the context of Caribbean carnivals merely reaffirms gender difference and masculine domination.

Yet in this context, where Eurocentric understandings of sexuality and gender are so often cut and pasted without attention to local histories and traditions, le mariage burlesquerepresents the contradiction imposed on French Caribbean citizens who continue to uphold a European (and heterosexual) model of marriage and family as the norm despite the co-existence of alternative family structures.

The “lesser” presence of women during le mariage burlesque has been addressed directly in the work of Martinique-based artists Annabel Guérédrat and Henri Tauliaut. In 2016 Guérédrat and Tauliaut performed the Marcel Duchamp-inspired La Mariée mise à nu par son célibataire même (The Bride Stripped Bare by her Bachelor) during the mariage burlesqueparade of Fort-de-France, Martinique.

The tableaux concludes with the couple departing on a boat against a tropical Caribbean landscape in the background. This parody of tourist brochure clichés that depict the Caribbean as a honeymoon paradise destination evokes the inequities of a global tourism industry that often replicates an uneven master/slave dynamic.

Each year carnival in Guadeloupe and Martinique attracts tourists from France and the rest of the world who come to enjoy this vibrant theatre of the street. For both visitors and locals the mariage burlesque masquerade ensures a collective memory of the cultural and political transvestism of the overseas departments, dressed up to resemble France and its universalist values. It is an embodied reminder of the enduring one-sided marriage between the islands and France.

Charlotte Hammond is a Leverhulme Early Career Fellow at Cardiff University and author of Entangled Otherness. See the original post on The Conversation.