‘The Excursion’ and Wordsworth’s Iconography considers William Wordsworth’s use of iconography in his long poem ‘The Excursion’. Through the iconographical approach, the author steers a middle course between The Excursion’s two very different interpretive traditions, one focusing upon the poem’s philosophical abstraction, the other upon its touristic realism. We caught up with author Brandon Yen to discuss this recent publication. 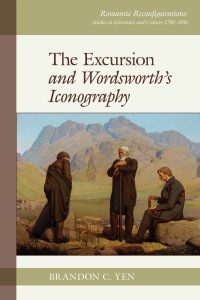 Firstly, could you tell us a bit about ‘The Excursion’ and Wordsworth’s Iconography and what compelled you to focus your research in this area?

‘The Excursion’ and Wordsworth’s Iconography offers close readings of a rich array of images that had a wide currency in late Georgian England. By contextualising these images, I seek to rediscover their cultural patterns and to bring a series of visual etymologies to bear upon Wordsworth’s use of iconography in his long poem The Excursion (first published in 1814), as well as in his other major works, including The Prelude. I pay particular attention to the complex ways in which iconographical images respond to, amplify, or challenge the pursuit of paradise in the post-revolutionary context – a quintessentially Wordsworthian theme which still resonates with us today.

Tree images had a vital role to play in the germination of this study. I had always been interested in the cultural meanings and physical forms of trees, having encountered many amazing trees in various parts of the world. Amongst my favourite is the splendid hornbeam near the Fen Causeway in Cambridge, which always greeted me warmly, rain or shine, snow or hail. This arboreal interest drew my attention to the recurring images of trees in The Excursion. I then discovered how tree images were used not only by Wordsworth but also by many of his contemporaries to express contentious socio-political ideas. Further research showed that a wealth of other images also had remarkable rhetorical power. I wanted to restore the rhetorical potential of these images and to see how they could contribute to our understanding of the nuances of Wordsworth’s poetry.

Why did you choose The Excursion to be the main focus in this study of Wordsworth’s iconography? Can you share any favourite quotes with us which particularly emphasise the point you are making in your study?

Wordsworth’s mind brims with images. We think of the immense beech near Alfoxden House, whose branches sagged down and rose again like those of a banyan tree. More than forty years after he had left Alfoxden, Wordsworth still remembered vividly how many boughs the beech had had. The Excursion is characterised by the variety, density and beauty of its natural images. These images function very differently in this poem than in Wordsworth’s other works because of The Excursion’s fictional and conversational form. Writing to Catherine Clarkson in January 1815, Wordsworth draws attention to the illustrative function of natural imagery within The Excursion’s dialogues: ‘Do not you perceive that my conversations almost all take place out of Doors, and all with grand objects of nature surrounding the speakers for the express purpose of their being alluded to in illustration of the subjects treated of.’ Often, these are both real things that exist physically and iconographical images that are imbued with wider meanings. I set out to explore the complex ways in which their latent meanings contribute to The Excursion’s central arguments.

My favourite image in this context is Wordsworth’s seashell. In Book V of The Prelude, Wordsworth mentions an allegorical dream in which he meets a traveller in an Arabian desert. The Arab is transporting a ‘Stone’ and a ‘Shell’ to safety in the face of an impending apocalypse. The Stone is Euclid’s Elements, whilst the Shell is poetry, which conveys to its listener a ‘loud, prophetic blast of harmony’. The image reappears in Book IV of The Excursion, where the Wanderer compares the physical ‘Universe’ to a ‘Shell’. Through this shell, the ‘ear of Faith’ hears ‘Authentic tidings of invisible things’. This musical metaphor occurs in many of Wordsworth’s well-known passages – in the France Books of The Prelude and in ‘Mutability’ in Ecclesiastical Sketches, for example – to suggest an inherent meaning and order underlying the apparently disjointed, inexplicable events in the world, such as cataclysmic developments in politics and crises in religion. In The Excursion, many visual images also embody ‘tidings of invisible things’ that enrich our understanding of the poem and of Wordsworth’s poetry in general.

Could you tell us more about the five categories – envisioning, rooting, dwelling, flowing, and reflecting – you refer to in your book?

The book is organised around these five categories of images; I use the present participles to capture a sense of the ‘active principle’ propounded by the Wanderer in Book IX. I look closely at how these apparently marginal images contribute to the central themes of paradise lost and paradise regained in The Excursion. The chapter on ‘envisioning’ reveals the changing perceptions of abstraction and prospect views around the period of the French Revolution. It asks how these perceptions bear upon the Solitary’s vision of ‘Glory beyond all glory ever seen’ in Book II and analyses the implications of the vision’s intertextual and intratextual connections with other verbal and pictorial images. Moving away from visionary insubstantiality, the next two chapters – on ‘rooting’ and ‘dwelling’ – examine grounded images. The chapter on ‘rooting’ considers Wordsworth’s shaping of the major characters of The Excursion in arboreal terms, exploring the ways in which trees in the poem not only covey a nostalgia for the ‘sylvan scenes’ of Eden but also witness and commemorate deaths and sufferings, which are integral to the post-lapsarian condition. Images of ‘dwelling’, like trees, are grounded in ‘the very world’ into which the characters seek to reintegrate the Solitary. I study a cluster of ‘ideal’ cottage images – as well as relevant images such as flowers, light, hermitages and temples – to show how they are iconographically constructed to counterpoise the Solitary’s present Lakeland cottage. The concluding chapter analyses the ways in which the iconographical reconfiguration of the post-revolutionary world in The Excursion involves ambiguous uses of water. It demonstrates that the functions of ‘flowing’ and ‘reflecting’ tie in with the poem’s central concerns with perspectives and its unresolved ending.

How does this volume pave the way for future research on the topic?

The Excursion raises many questions that have yet to be fully explored: prosody and form, colonialism and imperialism, sound and silence, paganism and Christianity, education, capitalism and industrialisation, amongst others. I hope my book will encourage readers to think more about these questions. On the other hand, I also hope it will lead to further research on visuality in Wordsworth’s poetry. We live in a world awash with visual images that tend to be ephemeral – easily available but quickly skimmed through and soon forgotten. Not so in Wordsworth’s time.

What are you going to be working on next?

My next book focuses on Wordsworth’s Irish journey of 1829. As an accompaniment to this new project, I’m collaborating with Trinity College Dublin to mount an exhibition on ‘Ireland and the English Lake Poets’, which will be open in Trinity’s Old Library in spring 2019. I’m also thinking about developing an illustrated book on Wordsworth’s trees as a sequel to Wordsworth’s Gardens and Flowers: The Spirit of Paradise (co-written with Peter Dale).

For more information on ‘The Excursion’ and Wordsworth’s Iconography please visit our website.