Pilar Diez del Corral Corredoira is the editor of the October volume in the Oxford University Studies in the Enlightenment series, Politics and the arts in Lisbon and Rome, a cross-disciplinary study of the Golden Age of Portugal in the eighteenth-century which explores new perspectives on John V of Portugal and his cultural endeavours with Rome. In this blog post she explores how the Portuguese monarch utilised the images on coins and medals to promote and fashion himself in the style of ancient emperors and old kings.

“All the new coins will show my effigy and name on one side, as some of the old kings in these reigns used to mint as well as almost all the Princes of Europe right now (…)”1

This quote comes from a new law issued by the Portuguese monarch, John V, on April 1722. By then the Portuguese King had been on the throne for fifteen years and, piece-by-piece, his magnificence plan for his country was coming together. The aforementioned law was not only intended to reform the coinage in order to provide his subjects with more adequate coins for transactions, but also formed part of a bigger plan of promotion of the Braganza monarch among the great powers in Europe. What better way for disseminating his image than in a coin that everyone would see? 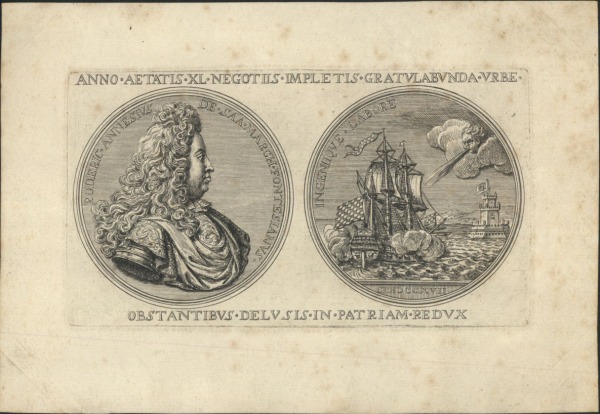 Image portrays D. Rodrigo Anes de Sa Almeida and Meneses (1676-1733), 3rd Marquis of Fontes. It does not yet mention the title of 1st Marquis of Abrantes, which would be conferred on him by John V on 12 August 1718.
Credit: Biblioteca nacional de Portugal

Likely inspired by the marchis of Abrantes (one of his closest counsellors and well-known collector of coins and medals) and also by his father-in-law, the Habsburg Emperor Leopold I who used medals to publicize his successes, John V understood early the impact of coins and medals as a vehicle to promote himself. He was seduced by the idea of fashioning himself on the side of the coins as ancient emperors and old kings. He also endorsed reform at the House of Mint in Lisbon, hiring foreign minters and acquiring new machinery in order to produce better coins and medals to fulfil his plans.

The Portuguese numismatic tradition was usually aniconic; John V’s change was a transcendent one and further illustrated just how important the use of images was for his grandiloquent plans. Underpinning these choices was the need to promote a strong and renovated image of the King before his peers, as he was, at that particular moment, challenging Pope Innocent XIII’s influence in the role Portugal played within the European arena. The king was adamant, Portugal must be seen and considered among the most powerful reigns – Spain, France and the Sacred Empire – so he planned to use the influence of Rome, through the obtaining of privileges from the Pope, in order to support and reinforce his belief and his agenda.

By 1722 John V was in his prime, among other things he had defeated the Turks with his ships in the Matapan’s Battle, he had already been granted the Patriarchal title for the former Royal Chapel in Lisbon, he had obtained the holy bands for his first-born as the other powerful reigns around him, and he had lured several top-notch artists and musicians to Lisbon in order to meet his most extravagant desires about his new and brilliant court. Of course there were still so many things to accomplish in order to pursue the glory John V was expecting to achieve but strong roots were already settled and the years to come would be bursting with grandiose commissions in art, architecture and music.

This book deals with John V’s dream of turning Lisbon into a new capital, taking Rome as its model, but it is not only concerned with the king’s fascination with the Papal City but also explores how John V’s plan for his country and court involved so many aspects, from art, architecture and music to ceremonial, image and of course politics. The volume does not pretend to be exhaustive but, rather, presents a notable sample of the most recent and refreshing research around a theme widely studied within Portuguese historiography but not so well-known outside of Portugal. Politics and the arts in Lisbon and Rome explores the obsession of John V with Rome from very different angles, tackling classical political history, musicology and art history, and ultimately aims to bring to life a fascinating period in the relations between Rome and Portugal – it also puts into perspective the achievements of a magnificent, and sometimes extravagant, king.

Politics and the arts in Lisbon and Rome is part of the Oxford University Studies in the Enlightenment series, published in collaboration with the Voltaire Foundation, University of Oxford.

One thought on “John V’s Lisbon: the new Rome”