The September volume in the Oxford University Studies in the Enlightenment series, L’amateur à l’époque des Lumières, studies the phenomenon of amateurship in several disciplines and cultural backgrounds. It aims to articulate sociological, rhetorical, and poetical perspectives, as the term “amateur” is considered to refer to a social type or role, to a discursive figure, and to a creator at the same time. In this blog post, one of the volume’s contributors, Enrico Mattioda, explores how the very definition of the word amateur sparked confusion, controversy, and clashes throughout the eighteenth-century.

The amateur has been the subject of new interest in recent years, not only in the German sphere, where attention to this theme has never been lacking, but also in France, thanks in part to Charlotte Guichard’s studies in the discipline of fine arts. The eighteen essays included in the volume, edited by Justine de Reyniès and Bénédicte Peslier Peralez, are the result of contributions made by distinguished experts in the field and all offer a vision of the phenomenon in Europe as never seen before. The book does not claim to solve all the problems related to the amateur, rather, its importance lies in its ability to both challenge the notion itself and to offer different arguments and perspectives to consider. 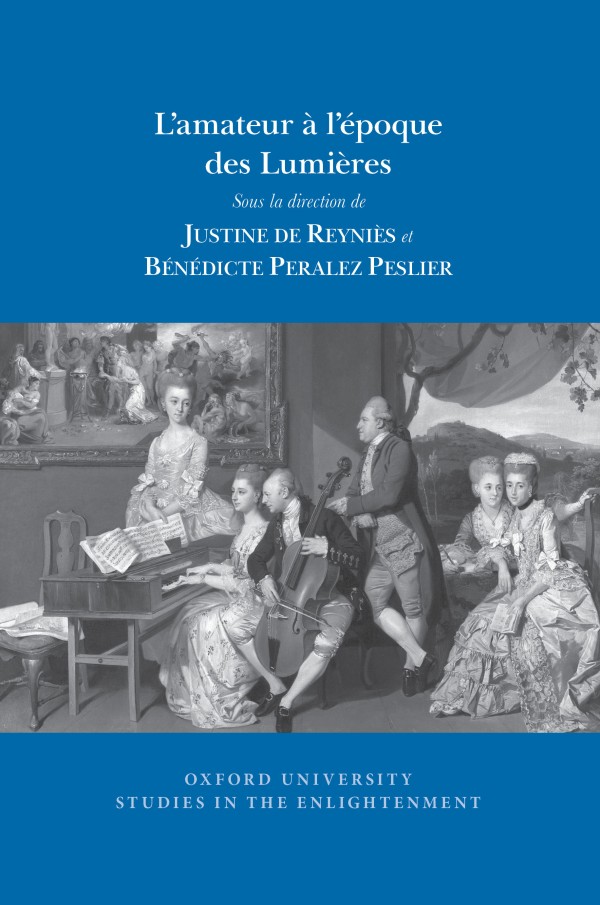 The investigation of the figure of the amateur is not limited to the classical fields of the arts and science. Instead, a vision of the concept of amateur is expanded, extended into other human activities ranging from literature to journalism, from sociabilité to coups d’oeil, and continuing into the subject of women who express themselves in music or literary judgments.

The impetus to extend the concept of amateur to other human activities may perhaps be located in the limitations to be found in Alexander Rosenbaum’s book, Der Amateur als Künstler, published in 2010. From a personal point of view, I don’t agree with Rosenbaum’s anti-historical approach, which seeks to define amateurs starting from the Italian Renaissance and trivializes the concept of sprezzatura developed by Baldessar Castiglione. It should be remembered that in the 15th and 16th centuries, the distinction between professional and amateur was not recognized in Italy: it was only in 1620, when the Accademia di San Luca in Rome received permission from Pope Urban VIII to establish who was an art professor and who was not, that the distinction between the fields began to be defined. Historical dictionaries indicate that the first attestation of the word ‘amateur’ was seen from 1682 onwards; my own research pushes the date to 1660, but certainly not any earlier.

These considerations lead us to a more general problem. For too long it has been claimed that there are synonymous terms to define the phenomenon within the various European countries; instead, we must accept the fact that these terms are false linguistic friends and do not cover the same semantic field. Confusion already reigned in the 18th century: the entry amateur in the Encyclopédie linked the French word to the Italian word ‘virtuoso’; Jean-Jacques Rousseau in his Dictionnaire de musique stated, instead, that the French word is a translation of the Italian word ‘dilettante’. These are two very different concepts and neither of them grasped the great semantic difference imposed in France with the creation of the amateurs honoraires within the Académie Royale de Peinture et de Sculpture, wherein, these amateurs honoraires came to establish the taste in the artistic field and to dominate the art market. In 1757, the Encyclopédie initiated a violent backlash, which then continued with direct clashes between Caylus and Diderot and with a series of art dictionaries published by the amateurs.

This controversy surrounding the definition was immediately acknowledged in Germany, where we first see the use of ‘Dilettant’ starting in 1759. The term held negative connotations in all fields except music, where the Italian word was used to mark a clear distinction with respect to the previous ‘Liebhaber’. From the French controversy, the critique of amateurism developed in Germany. The new negative concept of the dilettante was established. No longer was it the amateur who limited himself to the knowledge of an artform or who presented himself in private and non-profit spheres; it was now the bourgeois amateur who worked in an artform and presented himself in public without knowing the rules of the art itself and without a precise know-how. While we can find a fundamental document in the notes written by Goethe and Schiller in 1799 for an article that was never finished entitled Über den Dilettantismus, in France, the controversy had already come to a close in 1788 with the publication of Amateur, an entry by Claude-Henry Watelet for the Encyclopédie Pancoucke. Here, Watelet proposed two alternative solutions: to open the category of amateurs to the female world and to sociabilité or, in the opposite direction, to withdraw from society and ensconce oneself into a utopia of a solitary refuge in classical values. The following year, the French Revolution would bring an end to the amateur Ancien Régime.

The strongest merit to be found in L’amateur à l’époque des Lumières is in the volume’s drawing of attention to this cultural and social phenomenon – one which was fundamental to the culture of the eighteenth century – through its presentation of the different achievements of the amateur and its suggestions of updated readings of the various fields of knowledge and social sciences.

L’amateur à l’époque des Lumières, is part of the Oxford University Studies in the Enlightenment series, published in collaboration with the Voltaire Foundation, University of Oxford.

One thought on “The phenomenon of the “amateur””