With the release of this month’s book, The Enlightenment and rights of man, the Oxford University Studies in the Enlightenment is pleased to publish, for the first time in our nearly 65-year history, a translation of a previously published scholarly title. We are honored and proud that Vincenzo Ferrone, Professor of Modern History at Department of Historical Studies University of Turin, chose the series to present his richly sourced and deeply erudite argument to the English-reading public1.

The Studies have long been, and remains, an actively bilingual collection, offering books in French or English. And we have published previously translations of historical documents — most recently, Clorinda Donato and Ricardo López, Enlightenment Spain and the ‘Encyclopédie Méthodique’. However, this release marks a further expansion and evolution of our editorial mission as a scholarly collection interested in the full breadth and scope of the Enlightenment, a place for communication across disciplines but also across multiple languages.

The Enlightenment and the rights of man is an appropriate book for us to launch this new dimension of our publishing program because it addresses a theme of such great currency for multiple disciplines including history, politics, philosophy and law. Specifically, Ferrone seeks the origin of a language of “rights of man” and explores both its distinction from, and relevance to, contemporary understandings of political “civil rights” and a trans-national discourse of “universal human rights”. (These themes will be explored in a special discussion of the book on November 27, hosted by the Voltaire Foundation and the Bonavero Institute on Human Rights.)

One might consider the classical interpretation of the Enlightenment’s role in the history of rights to be found in the “Whig interpretation of history.” This interpretation, focused primarily on the history of England, traced a clear line of progression from late medieval and early modern natural law theory to the Enlightenment concept of “natural rights” put forth in Whig arguments for toleration, parliamentary sovereignty and limitations on the authority of the state over the life, liberty and property of the individual2. From there, this classical argument would hold, a more modern, liberal conception of rights emerged, through the American Revolution and early republic3.

Then, about 40 years ago, this interpretation came under challenge through several works of enduring significance. John Pocock proposed an alternative paradigm, one which argued for the importance of “an Atlantic republican tradition” not grounded in natural law theory4. Pocock suggested classical civic republicanism, and 17th-century radicalism, more than Enlightenment ideals of natural law, as the basis for a very different understanding of the place of rights in American (and more broadly, modern western) political culture. Nearly simultaneously, working in a very different line of approach, Garry Wills5 also downplayed Whig political ideology as the template for conceptions of political rights in the Declaration of Independence, and its legacy in American culture. Wills highlighted other Enlightenment languages, particularly the Scottish school of civil society and moral sentiment6. A third inflection away from classical natural law as the basis for rights followed Tom Paine’s trajectory, deploying “rights of man” as a concept encompassing not individual liberties but a broader vision of a democratic, egalitarian political culture. Paine’s view found fullest expression not in the Enlightenment but among the French Jacobins, for whom “the rights of man” characterised not only individual liberties of the 1789 “Declaration of Rights of Man and Citizen” but also the egalitarian fiscal policy of the republic and revised “Declaration” proposed in 1793 for its never-adopted Constitution7.

In the decade prior to the initial publication of Professor Ferrone’s book, the link between the Enlightenment ideas of natural right and “human rights” had been restored but not as it was understood in the classical model. It is this more recent body of work to which Ferrone responds most directly. Lynn Hunt sought to reassert the Enlightenment origins of human rights but not ground them in natural law political theory; she argued instead that we should understand the “rights of man” as having been inspired by the “torrents of emotion” which poured forth in literary works, especially novels and personal memoirs, and through which an idea of the “self” emerged. This self, she argued, became the subjectivity to which rights could be attributed8. Hunt had adhered to the more classical argument in her documentary textbook, French Revolution and Human Rights (1st edition, Bedford Books: 1996), emphasizing the influence of political debates over toleration and citizenship, and highlighting the structural and substantive link from the 1789 French Declaration of the Rights of Man and Citizen to the 1948 United Nations Universal Declaration of Human Rights. Even more recently, intellectual historian and legal scholar Sam Moyn argued that “human rights” should be understood as a contemporary political paradigm which emerges only after the twentieth century undermined the Christian and Marxist eschatological visions of human destiny. To Moyn, “human rights” were not an Enlightenment ideal so much as the “last utopia”9. 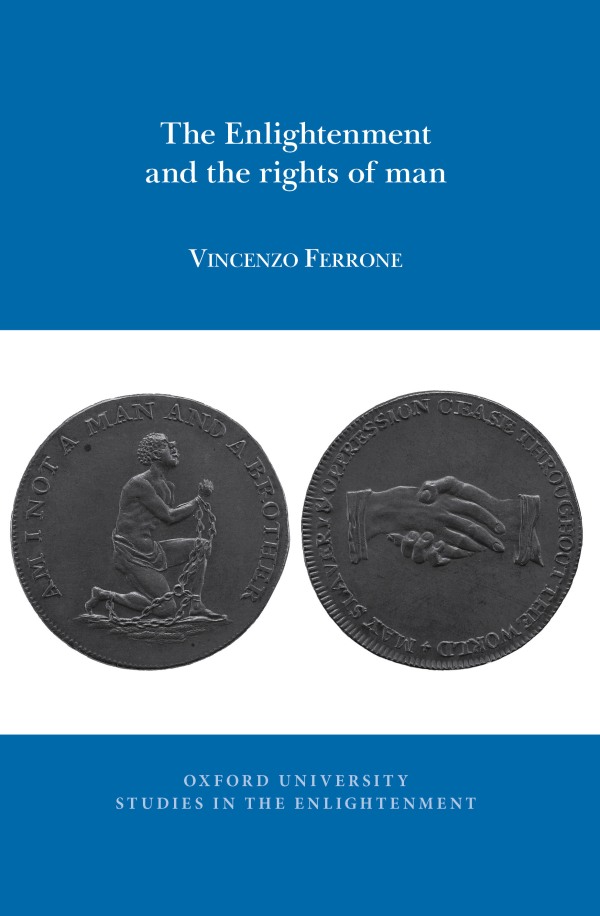 The Enlightenment and the rights of man, in response, reasserts the importance, and historical specificity, of the European Enlightenment as the central terrain for interpreting how “rights of man” (which he distinguishes explicitly from “human rights”) took right as a modern political language. Inspired by his scholarly mentor, Franco Venturi, Ferrone casts his view across Europe and North America broadly, though paying particular attention to the English abolitionist movement (as symbolized by the image on the book’s cover). He argues for the relevance of the eighteenth century to contemporary concerns (especially in his preface), although he agrees that the discourse of “human rights” should be located in the 1940s and 1950s. He makes a powerful case for the Enlightenment “rights of man” as not being historically limited in its vision, even though the philosophes and abolitionists of that era did not attain, in vision or action, the global scale of post-war human rights organizations.

At present, manuscripts which are translations of several other published scholarly books are currently in development or under review. Those interested in discussing a proposal for an English translation of works on the Enlightenment, especially works originally written in non-western languages, are encouraged to contact the General Editor or any other member of the editorial board.

2 Although Herbert Butterfield famously associated this line of argument most closely with Lord Acton, its clearest expression was in Macaulay’s History of England from the accession of James II.

3 One might also consider Leo Strauss’s Wallgreen Lectures, Natural Right and History (U Chicago Press: 1953) as a pillar of this classical interpretation of rights as an expression of natural law theory. For a much more historically broad and deep account of the natural law origins of rights as expressed in the Enlightenment and then American and French Revolutions, see Dan Edelstein, On the Spirit of Rights (U Chicago Press: 2018).

7 On “social rights” as a component of the idea of “rights of man” in the French Revolution, see for instance Jean-Pierre Gross, Fair Shares for All: Jacobin Egalitarianism in Practice (Cambridge University Press: 1997) and the essay of G. Charles Walton in David Andress, ed., Experiencing the French Revolution (SVEC 2013:05)

One thought on “Translating “rights of man” across language, time and meaning”