I’m fascinated by court housing! Courts are a form of high density, poor quality housing which was home to many thousands of Liverpool people from the 18th to 20th centuries, and are the subject of my new book. As Liverpool grew in the 18th and 19th century, spurred by trade through its docks, new homes were constructed at a rapid rate, including thousands of small back-to-back houses off courtyards – court housing. I’ve spent many years researching court housing since my work developing the reconstructed court at the Museum of Liverpool. 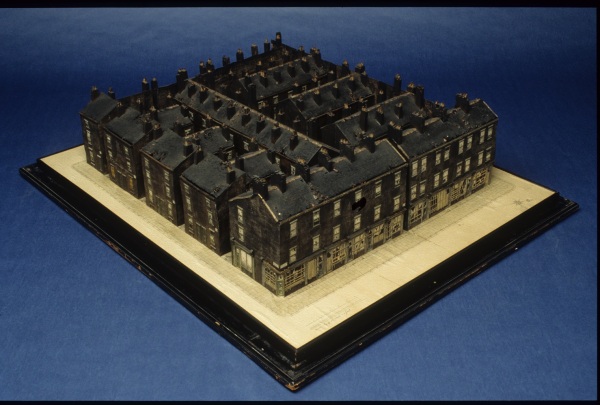 Understanding experiences of life in court housing is tricky – there are no first hand descriptions from the 18th or 19th century by people who lived in courts which tell us anything of life there, and descriptions by public health officers and journalists were usually written with specific, and very admirable, aims in mind – to improve conditions for the poorest people.

We also have very little physical evidence left to tell us about courts – on Pembroke Place there are the last extant remains – just three court houses of the thousands which once characterised the residential streets. I’m very proud to have led the first, and to date the only, archaeological excavation of court housing in Liverpool, which revealed the cellars of two homes, told us more about the structure and layout of the buildings, and revealed a wealth of objects which give insights into the lifestyles of those who lived there. We found beautiful leather shoes, clearly kept and worn for a long time, and repaired when damaged. We found jacks, toys for children or gambling game? We found glass bottles, all for mineral waters, none for beer – were the people living there tee-total, or did they just get a refund for returning beer bottles? And we found a ceramic egg, used in keeping chickens, not something shown in photographs of courts. The report on the excavation is available online here.

In this book I’ve been keen to use historical descriptions, maps, photographic evidence and census data, and add newly-researched information from oral histories and archaeological investigation to paint as full a picture as possible of the varied experience of life in courts. Both the physical remains and the historical sources show that court spaces were confined, and likely to be dark, damp, and cramped. Courts soon became known as ‘slum’ housing as they had few services, “outstanding defects were its lack of proper amenities – almost certainly no piped water-supply to each house”.  But that’s not the way people remember them in the 20th century, the Museum of Liverpool has collected oral histories from people who lived in courts and their memories paint a picture of happy lives lived in housing which left something to be desired!

Life in courts would have varied considerably in different courts, in different areas, and over time. There is evidence of people living in squalid conditions, terrible overcrowding, and lack of amenities. There is also evidence of well-maintained courts providing small but satisfactory accommodation. Drilling down into personal experiences shows court housing to be more complex than the common picture of ‘Irish slums’. Research shows very mixed communities living in many courts, including people new to Liverpool and those who’s families had lived here for many generations.

Focusing on this type of housing is an amazing route in to understating Liverpool’s history, including: city expansion and overcrowding; poverty and philanthropy; diversity and sectarianism; disease and public health. From overviews seen in population statistics or cholera maps to detail of people’s stories or unique objects, I aim to show how an overall pattern of development of a town/city impacts individual lives. I also highlight some of the pioneering individuals who worked to improve housing and conditions.

In 2014 I first walked into Watkinson’s Terrace off Pembroke Place, the last remains of a court in Liverpool, and my breath was taken away by being in the space. Courts were such a common way of life for people, but are so far beyond our modern experience – overcrowded small dark rooms off cramped courts are a world away from most modern houses. I hope this book brings something of the impact of those places and living conditions to readers.

This book has been written as part of the ‘Galkoffs and Secret Life of Pembroke Place’ project, and has been supported by the National Lottery Heritage Fund. 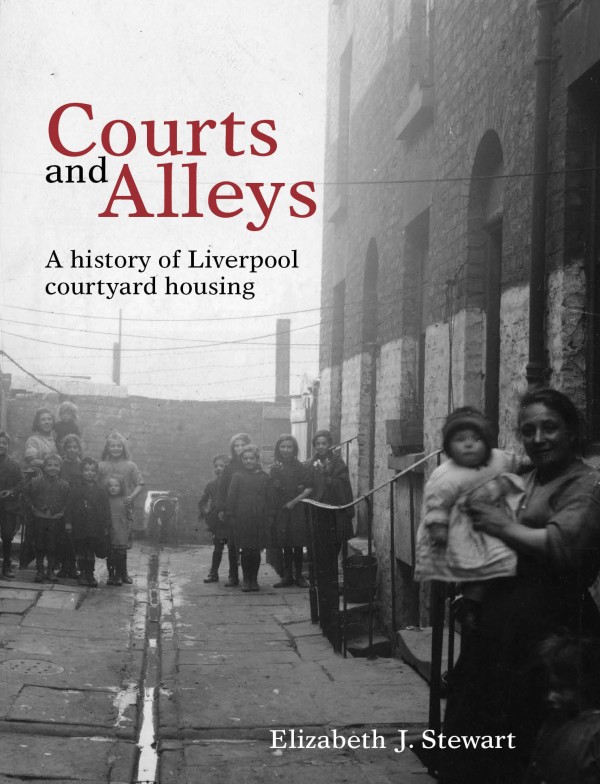 Elizabeth J. Stewart is curator of Archaeology and the Historic Environment, Museum of Liverpool.

Courts and Alleys is available in paperback through our website.