Alex Belsey is the author of the recent Liverpool English Texts and Studies publication, Image of a Man, a comprehensive critical reading of the extraordinary journal written by post-war British painter Keith Vaughan. In this post, Alex Belsey looks back at researching Vaughan’s journal and the many questions that arise when working with diaries, along with the great insights they can provide. 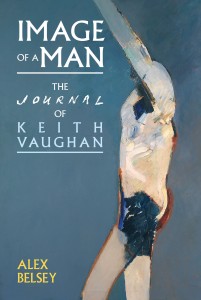 A diary or journal presents the prospective researcher with some unique challenges, particularly if their aim, like mine, is to attempt some literary critical analysis of the text. Diaries and journals are troublesome, changeable, often inconsistent. I found myself wrestling with the slipperiness of such protean texts time and again during the research that resulted in Image of a Man, a monograph on the lifelong journal-writing of British post-war painter Keith Vaughan (1912–77). How to address questions of sincerity and intention? How to ascertain the relationship between the text, the practice of its writing, and the author? And how, when writing, to avoid speaking for (or over) the author of something so intimate as a diary?

In many ways, Keith Vaughan’s journal is an extraordinary text, considering it was written over thirty-eight years across sixty-one notebooks from 1939, just days before the outbreak of the Second World War, to the very moment of Vaughan’s death by suicide following a painful battle with cancer. His journal stands out even in the illustrious company of consciously literary diary projects due to its considerable length and scope. This resulted from the journal having escaped the bounds of the situation of personal crisis in which it was commenced, in contrast with other contemporaneous diary projects – indeed, commenced within days of Vaughan’s in the autumn of 1939 – by Stephen Spender and Simone de Beauvoir, which were likewise prompted by states of deeply-felt personal crisis but would ultimately be more self-contained and finite projects than continuous, lifelong endeavours.

Vaughan’s journal is extraordinary not only because of its length but its breadth, with long passages – sometimes rehearsed, sometimes raw – on such various and interrelated subjects as art, identity, conscientious objection, the complications of desire, the nature of memory, and the alchemy of the creative process. Nevertheless, Vaughan’s journal is still a largely chronological record of his quotidian experiences, observations, and opinions, which is recognisable, through its confessional intimacy and questioning first-person voice, as diary. Whilst he did not choose notebooks with any formatting beyond ruled lines and margins, meaning he did not write in accordance (or opposition to) the parameters we associate with a conventional printed diary, his journal was still concerned with the day-to-day scribing of self synonymous with diary as both practice and text. Philippe Lejeune proposed, in ‘The Diary on Trial’, that, ‘Keeping a diary is a way of living before it is a way of writing.’ The text of Vaughan’s journal may be singular in its richness, but perhaps its greatest quality is its laying bear of this practice or ‘way of living’ that is shared, to varying extents, by all writers of diary and dabblers in diaristic pursuits.

As a researcher, poring through the many pages and notebooks to uncover that practice is a long process fraught with questions. If a diary or journal is often presumed to be a window into the innermost thoughts of its author, there is a fiendish difficulty with establishing the author’s ‘truth’. In other words, what can we safely claim to be the author’s sincerely held belief or consistent view on a subject, a person, or even themselves? What if these seem to change from day to day? And if a later diary or journal entry expresses a different view, does that supersede a previous one and become more truthful and valuable, or do we have to find a way of holding both views equally if they were both, at their respective times of writing, deemed worthy by their author for inclusion?

Sincerity is terribly tricky to determine, not least because the very notion disregards the vital aspects of testing oneself and experimenting with one’s voice that characterises much diary and journal-writing, whether self-consciously literary or otherwise. In Vaughan’s case, certain circumstances of a particular journal entry’s writing – perhaps self-confessed inebriation following an evening at the pub or a dinner party, or a bout of anger brought on by a sharp pang of jealousy – may invite us to consider certain views and opinions as ‘made in anger’ or a temporary departure from reason or reasonableness, but it must still be made clear in our writing on them that we as researchers are making assumptions based on an available context; moreover, we can only speculate as to whether ostensibly extreme or out-of-character sentiments are simply regrettable instances or whether they are unfiltered, unburnished expressions of deep-lying feeling.

Determining intention can also be very difficult. Vaughan at least makes this easier for us by making grand statements in his journal, for example with the opening entry of his third volume in April 1940 which declares a renewed sense of purpose and dedication to autobiographical rigour. The journal must, he resolves, be a record ‘as complete and intimate and brutally honest as memory allows’, with ‘no censorship of values’. As a researcher, such reflections and reorientations became the landmarks by which to navigate the terrain of the journal; if Vaughan declared something to be true, important, even revelatory, then it must be regarded as such and afforded the appropriate attention. In the third chapter of Image of a Man, I examine not only Vaughan’s words but his organizational devices and experiments in form – imagined letter, prose poem, even scientific chart – present in each volume. These experiments and assimilations of influence may have been made in moods ranging from restlessness and frustration to giddy, omnivorous playfulness, but in writing of them it was vital to always appraise their literary strategies and their relationship to the surrounding text, rather than leap to conclusions about their purpose or use them to spuriously psychologize Vaughan.

Whilst reading the many years and volumes of his journal in Tate’s Reading Room, I repeatedly found myself fascinated by the rhythms of Vaughan’s need to write. He did not write a journal entry every day and often left gaps of days or weeks with no writing. Only three months in, he claims to ‘hate writing this diary’, but several years (and another thirteen notebooks) later he clarifies that it is only when ‘feeling deeply about things’ that he can truly write. There is certainly scant evidence, particularly in the wartime years, that Vaughan expected his journal to be read by anyone else – a matter of self-preservation, given his extensive writing on sexual relationships with other men. In his middle-age, when sixties London swung but the taste of his success had soured, Vaughan expressed hope that the posthumous account provided by his surviving journal would be a rebuttal against his somewhat sanitized public image. But the overwhelming evidence suggests that the journal was maintained and valued by Vaughan as a strictly personal, private account of his development and an exercise in continual self-construction and reinvention.

Generally, it seemed Vaughan was more likely to write in states of agitation or emotional intensity, most noticeably when dissatisfied; throughout the early volumes, written during his conscientious objection during wartime, we find the recurring theme of ‘failure’. In 1940, he asserts that, ‘The purpose of this autobiography is to try to understand and account for my failure in life’. Twenty-five years later, he laments how his public success as a celebrated artist conceals ‘a private total failure’. It is surprising, and often upsetting, to read Vaughan writing about himself in this way, as if to reject his enormous talent and accomplishments as an artist, or to diminish his boldness in expressing and exploring his sexuality. And yet this is the truth found in the pages of the journal – and this realisation became a mantra I returned to again and again when researching and writing on Vaughan’s journal. It explains why my process of doing so was never overly concerned with cross-referencing the journal with other (perhaps more reliable) sources, or with using correspondence and other materials to verify biographical ‘fact’; the journal is a carefully constructed, consciously literary life-narrative that demands to be appreciated as the definitive account of Vaughan.

For more information on Image of a Man, visit our website.