James Fowler is the co-editor of the March volume in the Oxford University Studies in the Enlightenment series, Enlightenment Virtue, 1680-1794, in which contributors analyse complex and shifting relations between religious and civic virtue during the Age of Enlightenment. In this blog post, he explores how the debates of that period may not be so dissimilar to the discourse surrounding questions of virtue in the contemporary national and global crisis.

With frightening speed, COVID-19 has brought about a global crisis. In western democracies the phenomenon was first tracked and measured from a distance, then discovered to be not just ‘their’ problem, but ‘ours’ too. In the process, common behaviours were subjected to new scrutiny; with the virus, moral sentiment proliferated. Formerly anodyne acts were proclaimed to be vices, twinned with equal and opposite virtues. Politicians devised lists of what may and may not be done, and other lists, of what should and should not be done. These lists concerning ‘should’ and ‘should not’ are in fact a plea for civic virtue: if the majority are sufficiently virtuous, the nation will be healed. Striking a utilitarian note, certain commentators began to argue that the good of some must now be sacrificed for the good of all, and current lives, for future prosperity.

In the Enlightenment era, natural disasters, contagions, and wars also fed debates about civic (and other) virtues. Then as now, these were embedded in larger discussions of morality, the common good, and the relation between individual citizens and the polity. For instance, we may recall an exchange that took place between Rousseau and Voltaire, following the Lisbon earthquake of 1755. Voltaire wrote a poem expressing rage against Optimists who might still argue, with Alexander Pope, that ‘partial evil’ is ‘universal good’. In the case of the Lisbon earthquake, ‘partial evil’ would consist in many thousands of deaths. Yet according to Voltaire’s Optimists (whom he addresses as ‘wretched mathematicians of human suffering’), universal good would be sustained by those very deaths. After all, children could inherit their parents’ wealth, stone masons find employment, and animals feast on rotting corpses. In a letter to Voltaire, Rousseau objected that the disastrous effect of the earthquake was not tied to some unfathomable cosmic riddle. It was, rather, the consequence of the European tendency to live in large cities, where so many are exposed at once to a single danger; and neither God nor nature, but humanity was responsible for this. More generally, as in his celebrated Second Discourse, Rousseau argues that, as it pursues what (other) philosophes see as progress, civilisation reaps what it sows. 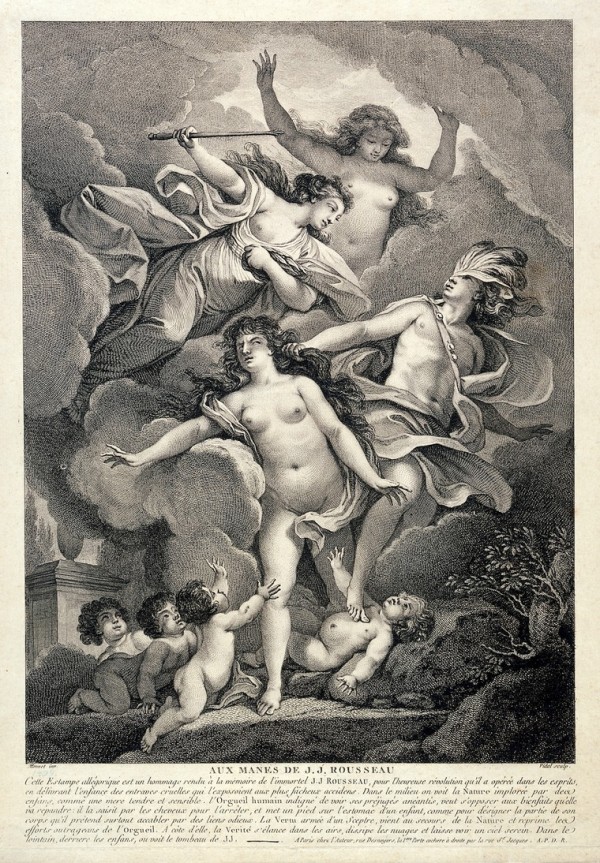 Thanks to the writings of Jean-Jacques Rousseau, Virtue and Truth prevent Human Pride from resisting the efforts of Nature to allow children to live a happy life. Engraving by G. Vidal after Ch. Monnet. Credit: Wellcome Collection. Attribution 4.0 International (CC BY 4.0)

If we can hear echoes of such debates in contemporary life, it is because we are, in important respects, heirs of the Enlightenment. Many of us think about virtue and the common good in an entirely secular way; our moral duties are owed, we feel, not to God, but to our fellow citizens. It makes sense to describe this as a ‘post-Enlightenment’ view. After all, it counted as a bold step when, towards the end of the seventeenth century, Pierre Bayle wrote that a society of atheists might be capable of virtue.

But by the mid-eighteenth century, secularisation, linked by the historian Paul Hazard to a ‘crisis of the European mind’, had gained extensive ground. In France, atheistic thinkers suggested that virtuous behaviour should be understood as whatever contributes to the common good in this, the only life we have. Diderot and the materialist coterie of the baron d’Holbach, for instance, tended towards this view. But Voltaire and Rousseau, who abhorred atheism, were secularisers, too; for they rejected ecclesiastical explanations of the Lisbon earthquake (or anything else). In brief, secularisation in France was in the first instance a case of pushing back against the mundane influence of the Church and its theology. We should be wary, however, of casting a few major writers as the isolated prophets of secular modernity. If there was a crisis of the European mind, it was caused by a nexus of cultural, social and historical forces which far exceeded the ‘Republic of Letters’.

During the Revolution, various factions laid claim to civic virtue. Speaking for the Montagnards, Robespierre asserted, not only that virtue was the essence of the (French) Republic, but that Terror could be an ‘Emanation of virtue’. He also echoed those, including Rousseau, who (had) admired the ‘male’ virtues of Sparta, or other ancient republics. Despite women’s participation in the Revolution, the virtues prescribed by the Terror were gendered ones; indeed, what was virtue in a man might be vice in a woman. The Moniteur universel of 17 November 1793 held up three recently executed women as examples of vice: Marie Antoinette; ‘la femme Roland’ (married to the Girondin Jean Roland); and Olympe de Gouges (author of a Declaration of the Rights of Woman). The former queen was a ‘bad mother’ and ‘debauched wife’; as for the others, they had in different ways ‘forgotten the virtues of their sex’. For a brief period, at least, it must have seemed that the state did not distinguish between private, public, and gendered virtue, nor between unvirtuous thoughts and crimes against the nation. Public executions became, as never before, virtue’s instrument. 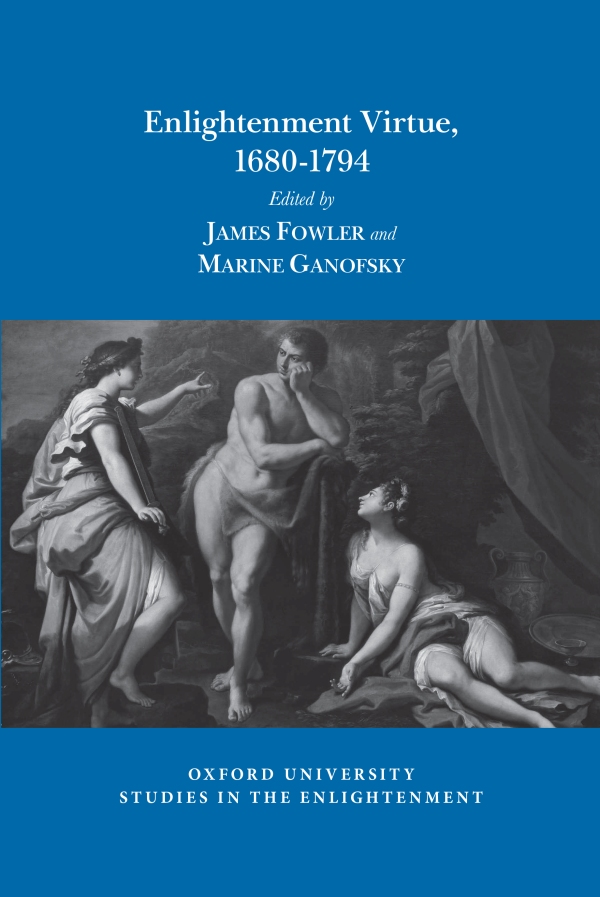 In moments of national crisis, we tend to inquire, earnestly and urgently, what should count as civic virtue. If only half-consciously, we may turn to notions of the common good, especially utilitarian ones, which we have inherited from the Enlightenment era. Certainly, that period is an excellent place to start if we wish to put the current debate into historical perspective.

Enlightenment Virtue, 1680-1794 is part of the Oxford University Studies in the Enlightenment series, published in collaboration with the Voltaire Foundation, University of Oxford.

One thought on “Virtue in Crisis: Enlightenment Perspectives”